We at Performance Racing Oils are the North American distributor of Millers Oils, who has introduced nanotechnology to motorsports in F1, IndyCar, WRC, and many other professional and amateur race series with its Nanodrive line of engine and gear oils. We have a lot of info on the site, so we'll try to give you a quick overview, and let you dig into more info as you see fit. At the end, we'll supply some links to other resources like engineering publications, product line info, etc.

The nanotechnology in Millers Oils' Nanodrive line has been shown to provide significantly better protection to engines, transmissions, and differentials. It does so by reducing friction, which has the side benefits of improving horsepower, reducing operating temperatures, and improving fuel economy. Additionally, a subjective measure of "shift feel" has improved by virtually every customer of ours who has tried the gear oil in their transmission. 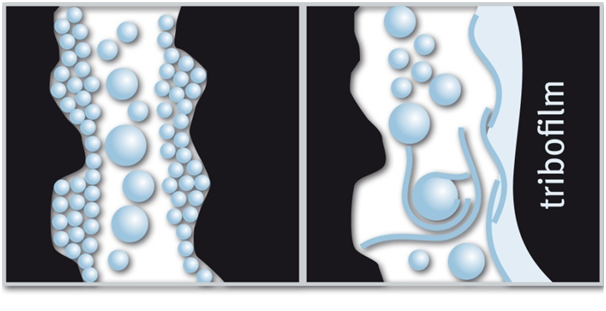 Nanotechnology is rooted in a 60 atom sphere called a "Buckey Ball" that looks like a soccer ball at the amotic level. With conventional lubricant, tiny microscopic asperities on the metal's surface slide against each other and break apart. These asperities can be protected by nanoparticles, which act like billions of ball bearings to fill the gaps and make a more uniform surface on the atomic level. The nanoparticles in the Millers Oils are inorganic fullerenes that have multiple layers of nested spheres, and are less than 1/10th of a micron in size (0.000004"). These particles are to a soccer ball as the soccer ball is to the Earth in terms of scale. The nested spheres resemble onion layers, which can exfoliate under extreme pressure and form a protective tribofilm on the metal surfaces. Due to the tremendous surface area, the nanospheres will migrate to and "stick" to the walls of lubricated components.

Millers Oils gear oil with nanotechnology was awarded the Most Innovative New Product at the 2009 World Motorsports Symposium, beating out a data acquisition system from McLaren and the KERS system from Williams. Millers' engine oil was the runner-up for the same award in 2012.

Gear oil
The current line of gear oils has been in use in many series across Europe such as the British Touring Car Championship, WRC, ASCAR, as well as historic race series. Formula 1 has taken notice, with multiple teams in various stages of testing. After outstanding results with BHA in IndyCar in 2013, some NASCAR teams have begun testing. KAPS and Samsonas now both exclusively specify Millers Oils gear oil with Nano Technology in their dogbox transmissions. Comments and endorsements from these from some of these users can be found in our Testimonials Page.

The incorporation of nanotechnology in gear oils provides many benefits, including:

Engine Oil
Renowned European engine builder Zytek has tested this new oil in Formula Renault 3.5L Spec V8 engines it supplies for the series, and realized a consistent 5 horsepower improvement over the leading low friction fully synthetic brand. Several other external entities have tested the new Nanodrive oils, with similar to higher improvements, as can be read about here in the Dyno Results section of our website:

In addition to the incorporation of nanotechnology, Millers' line engine oils uses tri-ester, PAO, and Group III base stocks with a robust additive package. The benefits of Millers' engine oils include:

Printouts from actual lab results of both Millers and some of the most common racing oils from our competitors can be viewed here, near the bottom of the page.  The full range of Nanodrive engine oils can be found here.

Publications, outside voices, and availability
Millers Oils has been featured multiple times in many of the better engineering magazines such as SAE International, Racecar Engineering, Race Tech, etc. Copies of those articles, as well as more in depth technical articles on Millers Oils and nanotechnology can be found at our Tech Articles page, here . Millers Oils can be purchased through any of our dealers, which include Apex Performance, LN Engineering, Paragon Products, Essex Parts or directly through Performance Racing Oils or Racer's Edge. PRO's direct line is (865)200-4264.

Waste reduction and better protection
Having performed engine oil sample testing of many oils, including many leading synthetics, we have learned that viscosity does not always hold up and can sometimes even necessitate a change of oil after one weekend of racing. This becomes expensive in terms of the amount of oil used, and excessive wear and tear to your engine. In a sound engine, Millers Oils Nanodrive triple ester oil can run multiple race weekends without changing and without loss of protection.   See the Engine Oil durability study results from the tests we conducted our World Challenge Porsche 996 here.

So when should you change your oil?   Well, For about $35, we recommend that instead of changing your oil, you first take a small sample of oil after every weekend and get a simple analysis done which will tell you how the oil is doing and if it should be changed, get info.

Thanks for checking out us. We've got a lot of stuff up on the site, but we'll give you a brief overview of who we are, who Millers Oils is, and why it is the best oil on the market.

Performance Racing Oils was founded by racer-engineers with backgrounds in niche market motorsports component design and engine development with a major American OEM. We have a history of success, and believe that Millers Oils has the technology to give its customers the edge that we have sought throughout our careers.

Millers Oils is a small British company on the cutting edge of technology for lubricants for the motorsports industry. Millers maintains a very high percentage of technical employees, and blends all of its products in a single plant in West Yorkshire, UK, ensuring superior and consistent products over larger manufacturers with multiple blending facilities. Millers has remained family owned since its inception over 130 years ago, enabling Millers to focus on quality above all other factors.

There are a fair number of racing oils on the market, and even more that are racing oils in branding only . While many companies will tweak their products in response to what is trendy, such as ZDDP content and viscosity index (VI), the best oils start with the best base stocks. More can be read about the base stocks in our FAQ. Millers Oils are designed to give the best results by optimizing the blend ratios such that the different base stocks work to fully complement each other. Additives, including nanotechnology based materials, are then added to give the oil an added level of protection, robustness against acidity.